Set in the lower Severn Valley below Powis castle, Coed-y-Dinas was home farm to Powis Castle and supplied the produce and meat required to run the castle at its peak. Many of the buildings are Victorian and there is evidence of a house on the land as early as 1720. Extensive building and restoration work was carried out on Powis castle and its estate buildings from 1772 and it is likely that many of the buildings at Coed-y-dinas were built or commissioned at this time. Existing buildings will have been updated or even replaced.

Much agricultural innovation occurred at the farm during its working history. Nearby renowned Leighton Estate had the upper hand with Liverpool architect W H Gee on board as they threw money at the huge undertaking of updating the whole estate to use steam powered turbines. Powis Estate undertook similar changes in a slower, more considered manner and many of the fixings and fittings can still be seen in the Garden Centre today.

As you wander through the Garden centre, keep an eye out for the grey brackets on the gift hall wall. These held the steam powered rotating spindle, which provided power to the machinery via a belt driven system. The last belt drive drum is visible just past the candle room. This area would have been noisy, dusty and hot for the workers. 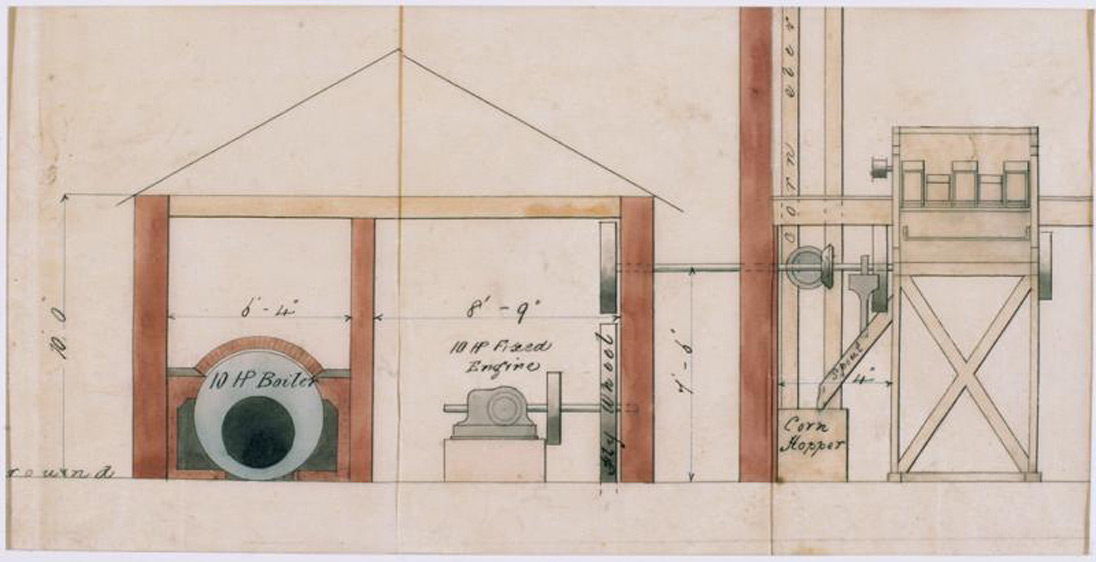 With the Montgomeryshire canal near the grounds of Coed-y-Dinas, much of the machinery needed for the farm was brought in by canal, initiating a symbiotic relationship that was to have long lasting consequences for both. Lime from the canal was used on the fields and lots of the water initially required for steam-powered machinery also came from the canal. Water was later brought in from the Mill pond at the Castle using a gravity based system and stored in a lower pool near the Sawmill. 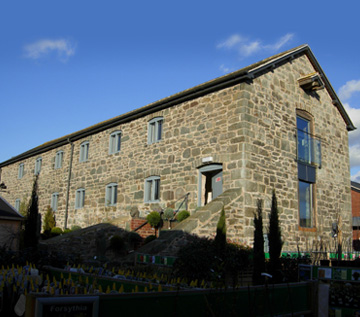 Some buildings on the Coed-y-Dinas site are in a grey stone, dissimilar in style as well as appearance to the majority red brick buildings. One of these, currently used as the craft department, has long been rumoured to have been built by French prisoners of war. Research indicates, however, that this is unlikely to be true. French prisoners billeted in the locale were officers captured during the Napoleonic wars and as such, were allowed a degree of freedom and not expected to carry out work duties. During this time, there was a dyke being built along the river Severn close to Welshpool Airport and there is some evidence suggesting French Officers helped with this work. Given the close proximity of Coed-y-Dinas to this area, it is possible that prisoners did help with this building but no documents survive to prove this theory. This building was originally three floors in height and built as a grain drying and storage area. The barred windows, originally unglazed, would have allowed a good flow of air to dry the grain. The building was later used to house pigs. 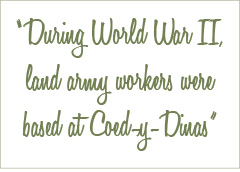 During World War II, land army workers were based at Coed-y-Dinas and the huts built as their accommodation are still on site today. These can be seen as you drive into the Coed-y-Dinas grounds. The farm originally had many assets less seen today and farmers would always have required extra help for such a sprawling enterprise. Irish itinerant workers who travelled the country looking for short-term work were housed on the farm, over the original Blacksmith forge. This can be seen to the left of the Garden Centre entrance, to the right of the hairdressers, there today. 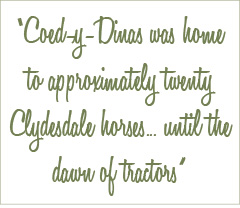 Other buildings at the farm included an abattoir, where meat would have been prepared before being sent to the castle and the Dovecote, where birds will have been raised for the castle table. Remains would have been turned into fertiliser in the nearby bone mill, situated off site, near the sawmill. Coed-y-Dinas was home to approximately twenty Clydesdale horses, who carried out all the manual labour until the dawn of tractors. These were housed in the stable block, now stretching from the inner soft furnishings area towards the restaurant, through the external courtyard. Brood mares were stabled near the house, where a quadrangle of stables are situated. All these horses would have worked on both the farm and castle lands and the breeding is likely to have been for all estate farm needs. The farmhouse is also noteworthy. It has around fourteen bedrooms and the kitchen will have catered for all workers based on site.

Charlies Stores Ltd purchased Coed-y-dinas farm and the surrounding land in 2002. It was recognised there was potential with this magnificent set of buildings and the decision was made to develop the site into a Garden, Home and Country Centre. The six million pound development required detailed planning permission which took longer than usual because the buildings are listed and the redevelopment had to fit within strict regulations. It is the first time Charlies Stores has worked with a listed site and the architect’s overall brief was to retain the historic character of the site and ensure the fabric of the old stone buildings was kept intact as far as possible.